The Overcoming Church: Taken and Reoccupied

The congregation of the First Baptist Church of Nashville had just gathered for worship on Sunday morning, February 11, 1862, when the news came that, after a bloody four-day battle, Confederate Fort Donelson had fallen to the Union Army. Situated on the Cumberland River twenty-five miles west of Clarksville, the fort was the last bastion of defense keeping the Federals away from Confederate Nashville. The rumor was that Union Army General Buell planned to set up batteries of cannon across the river in Edgefield to bombard our capitol city into submission. 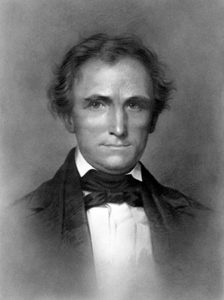 R. B. C. Howell, pastor of First Baptist Church of Nashville at the time.

Pastor R.B.C. Howell recalls watching the alarm spread as he tried to continue the service, but the commotion was too much. After a few minutes, he “dismissed them with the usual benediction.” A number of church families joined the citywide panic, packing wagons and carriages to flee south—many for the duration of the Civil War.

Leading up to the war, most of the members of the First Baptist Church, along with Nashville and most of Tennessee, were “secessionist.” To be a secessionist was to decry the abolition of slavery that was spreading across the nation and to support the southern way of life so dependent upon slave ownership. Pastor Howell wrote that he was a “states’ rights man.” Along with most Southern Baptist pastors across the South, he was a staunch secessionist. Howell wrote later that “so unanimous was the church that it was not known to me that a single member seriously dissented from my views and feeling on the subject” of secession.

In June 1862, military governor Andrew Johnson demanded all town leadership sign an oath of allegiance to the Union—or suffer consequences. Along with five other pastors, Dr. Howell refused, and Johnson said of them, “they are the enemies of our government,” and sent them to the Nashville Penitentiary. While the other five ministers were sent on to a Federal prison in Ohio, Howell was paroled with restrictions after two and a half months due to a debilitating illness.

The battle of Stones River raged for four days in January 1863. First Baptist was ordered to turn over their building for use as a hospital. This was noted in the church minutes with the church clerk’s marginal notation in bold letters: “Taken, Jan’y 5th, 1863!” A special committee found a place for the church to worship and conduct its Sabbath School in “the rooms formerly occupied by the Young Men’s Christian Association, over the shoe store recently occupied by Farrar & Dismukes.” 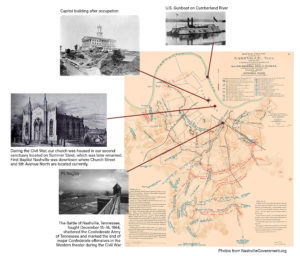 In August 1863, the church building was released, and the members began the work of repairing damages. However, the next month, the Battle of Chickamauga just south of Chattanooga brought many Federal casualties to Nashville. The First Baptist Church was again confiscated. It was released again in December only to be seized a third time. This time it was used as a barracks for soldiers on furlough. The church minutes tell of the heavy damage wreaked by “unbridled soldiers” who destroyed furniture, stacking the pews in the street (to be used as firewood), stripping the interior, and ruining the church’s new organ.

The deacons finally received a letter from the Federal government promising to underwrite the repair and restoration of the church building. Yet the next day, the church lost its building a fourth time—this time again for use as a hospital. The battles of Franklin and Nashville had taken place, sending thousands of casualties streaming into Nashville.

Once again without a place to worship, the congregation received a letter offering Sabbath use of the entertainment theater across the street in the old Odd Fellows Hall. The proprietor said he would keep the stage curtains closed so the congregation would not have to gaze upon the stage where entertainment took place that was forbidden to them. Wednesday night services were held on Thursday nights back at the original building lost to the Campbellites in 1828.

The close of the war left First Baptist and its members to “pick up the pieces.” For a time, the church seriously considered selling its building. The total repair costs throughout the occupation were estimated at $12,000. After appeals, including a delegation to Washington, the Federal government reimbursed the church $5,000. The church’s indebtedness was heavy when they set to work rebuilding.

Thus, once again the First Baptist Church of Nashville became “the overcoming church.”