The Overcoming Church: Starting Over with Only Five Members 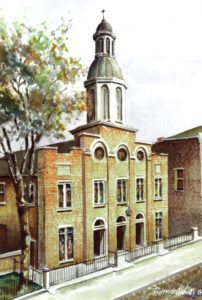 On July 22,1820, our church was founded as the Baptist Church of Nashville. The church had thrived under its first pastor, Reverend Richard Dabbs, a seasoned church planter from Virginia. The Baptist Church of Nashville had grown and prospered to the extent that it was able to build a handsome church building where the present-day Nashville Public Library now faces the state capitol. The city admired the building so, that in 1827 Sam Houston was inaugurated governor there. But two years after the building was finished, pastor Dabbs died in 1825. The church members were stunned, and they struggled to find a pastor.

The second pastor of the Baptist Church of Nashville was Philip Slater Fall, who had moved to Nashville in 1826 to teach in the Female Academy. He was a Baptist pastor in Louisville when the Nashville church tried unsuccessfully to call him as its first pastor in 1821. Upon his move to town, Fall united with the church and was soon voluntarily performing most of the ministerial duties. It was not long until the church called him, and he preached his first sermon as pastor in May 1826. Unbeknown to most of the members, Fall had persuaded his church in Louisville to follow the new Restoration Movement begun by Alexander Campbell and others. This movement led to the formation of the Christian Church and its later offshoot, the Churches of Christ. Many Baptist churches in Kentucky, Tennessee, and Alabama aligned themselves with this new movement, leaving their Baptist associations.

Pastor Fall soon began to persuade members in Nashville to espouse the principles of the Restoration Movement. On May 24, 1828, a majority of the members declared the original church constitution and rules of order to be null and void and adopted the principles of Campbellism. The same declaration stated that any dissenters choosing to leave the church within the next two months would be granted a letter certifying good standing in the church. Those dissenting refused to withdraw, continuing their attempts to dissuade their fellow members from “the new order of things” and to return to the principles upon which the church had been constituted in 1820.

Finally, the dissenters made their decision, the result of which is described in Clayton’s History of Davidson County:

The minority met for worship at the courthouse October 10, 1830, and were denouncing Campbellism, organized the First Baptist Church of Nashville, and abandoned their handsome church to the “Reformers.” Meetings were regularly held at the courthouse, then at the schoolhouse on High Street and at the Masonic Hall.

The five dissenters who signed their names to this renewed constitution were: Henry R. and Sarah Cartmell, Lipscomb Norvell, Cecelia Fairfax, and Elizabeth Link. The Nashville Baptist Church started over as the First Baptist Church of Nashville.

One story denoting the personal pain of this saga revolves around Lipscomb Norvell, veteran of the Revolutionary War. His children had all grown and left his plantation in central Kentucky; three of them had settled Nashville and were quite successful. Lipscomb had been church clerk in the Dripping Springs Baptist Church of Knob Lick, Kentucky. After his wife Molly died, he liquidated his property and moved to Nashville to live with his son, Moses Norvell, editor of the Nashville Whig and a deacon of the Nashville Baptist Church. Lipscomb became a member of the church. When the five dissenters left the church to reconstitute in the courthouse, Moses remained a leader in the Nashville Baptist Church which became the Spring Street Christian Church. The church split became a family split: the old man moved across town to live his remaining years with his daughter, Mary Norvell Walker. He also became the first deacon and the first church clerk of the newly reconstituted church.

The First Baptist Church of Nashville soon began to receive members from the former church and called its third pastor, Peter S. Gayle. Under his three-year leadership the church grew to 105 members and raised enough funds to purchase land on Summer Street (now Fifth Avenue).