The Overcoming Church: Rebuilt and Preserved, Lost and Found 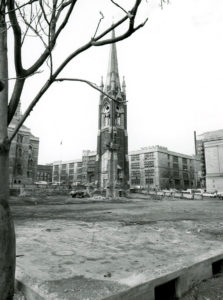 Construction site in 1969 when old sanctuary was removed and only the tower remained.

The third building of the First Baptist Church of Nashville, dedicated in 1886 at Seventh and Broad, had become inadequate to hold the congregation that had grown so much under the 34-year leadership of Pastor W. F. Powell. The sanctuary had undergone repeated renovations, including the addition of a balcony and still could not contain the congregation. When H. Franklin Paschall arrived to be pastor in 1956, he was told by the leadership that the church should erect a new and enlarged sanctuary. As the church approached such a bold change, the dilemma was faced: shall we expand the old or replace it? Paschall presented the compromise of replacing the sanctuary while preserving the tower. In 1967, the congregation voted, with only five dissents, to replace the beautiful old sanctuary, while preserving the original tower on its northwest corner. From 1967 -1970, the congregation walked across the street to Hume-Fogg High School for worship while the new (present) sanctuary and adjoining building was constructed. In May 1970, the church spent a week of various gatherings to celebrate its sesquicentennial as well as its dedication of the new sanctuary. On Sesquicentennial Night of that week, evangelist Billy Graham preached from the new (present) pulpit. This service was televised on WSM-TV. 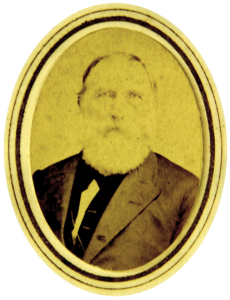 After the old sanctuary had been completely removed, leaving only the 1886 tower, the congregation was horrified to discover the 1884 cornerstone, with its sealed box of memento documents, had disappeared. Its documents would be crucial to the celebration of our church’s sesquicentennial in 1970. Interestingly, in 1969, Walter K. Hoover, a Smyrna funeral director, who was a known collector of antique documents and a lay church historian, was approached by a man wanting to sell him some old documents he had found in a dump. Hoover noticed these items referenced the First Baptist Church and all predated 1884. He bought them and called the religious columnist at the Nashville Banner newspaper, who then called First Baptist. Most of these marvelous materials now reside in our church archives. Among them are carte de visité photographic portraits (2½”x4″) of
pastors Samuel F. Baker (1850-1853), Thomas E. Skinner (1867-1870), Tiberius G. Jones (1871-1883), C. H. Strickland (1883-1889), and one inventoried as R. B. C. Howell (1857-1867), shown here. These papers came to light just as Lynn E. May, Jr. was finishing his epic The First Baptist Church of Nashville, 1820-1970. Was this coincidence or providential?  The whereabouts of the 1884 cornerstone itself remains a mystery. 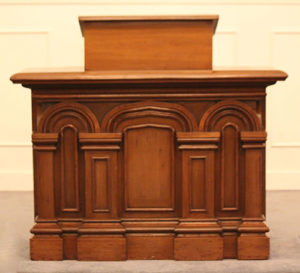 Here is another lost-and-found story. When the Baptist Church of Nashville became the Spring Street Christian Church in 1828 and the five dissenters who left it and started over as the First Baptist Church of Nashville, the pulpit, along with the building was lost to the majority they left behind. When the Spring Street Christian Church relocated and became the Vine Street Christian Church, there is no record of the old pulpit surviving the move. In fact, for decades its whereabouts still remains a mystery. In 1925, the Central Church of Christ on Fifth Avenue North, was founded. Some years later, according to its church historian McGarvey Ice, the old pulpit was discovered in the shed of a woman who had become a member. The church cleaned and refinished it, and now the old Baptist pulpit is the sanctuary pulpit of Central Church of Christ, just over two blocks from our own sanctuary.