October 4, a group from Nashville First joined with other local congregations to construct a Habitat for Humanity home in the Park Preserve in North Nashville for the Abiangama family. Thank you to all who participated! 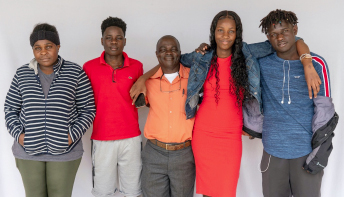 Franco left the Republic of Congo and lived in Uganda for 12 years before arriving in the United States in 2016. He left Africa because of war and “the difficulties that my children faced finishing school and because I needed a better job,” he says. Franco has four children ranging in ages from 14 to 21 years. His carpentry skills landed him a job with Solomon Builders where he has worked since 2017. Franco was a pastor in Africa and speaks four languages, including Swahili, which enabled him to help establish a Swahili church service at Woodmont Hills Church. In 2019, he volunteered with his church on the annual Unity Build and that day told Unity Build Coordinator Gladys Wolfe that he planned to apply for a Habitat home himself. His perseverance to create a better life for his family never wavered. After several applications, he qualified for Habitat’s homeownership program and is the 2020 Unity Build future homeowner.

Franco’s family lives in a four-bedroom rental with one bathroom that costs more than half of his income. One of the bedrooms is a converted garage and lacks a vent for heating and cooling. The oldest children work to help with the household expenses while also attending college. Despite all of those challenges, Franco still sends money to family members in Africa. With the aid of his eldest daughter translating, Franco attends Habitat for Humanity’s homeownership classes to learn how to budget for a mortgage, with his daughter also gaining valuable financial management knowledge.

Franco says, “Owning a home will enable me to save money and plan a better future for my children. Habitat is life changing.”