Frank and to the Point: December 2019

The Greatest Gift is Jesus.

This year as we prepare our hearts for Christmas, the Advent Season calls us to remember that God sent His one and only Son to rescue us from the domain of sin and death. Starting Sunday, December 1, the sermons for this year’s celebration are taken from some of the most evangelistic (good news) texts found in Scripture. If you’ve been praying for a “Who’s Your One” friend or relative, these messages will make it easy for you to have a good follow-up conversation with that person if you can invite them to be present for one of our December morning worship services.

The Retirement of Tom Crow 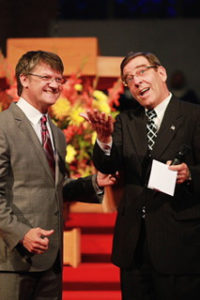 Tom and I first became acquainted when I was a part of the Baptist Sunday School Board’s effort to support Dr. Charles Page during his cancer treatments in the winter of 1997. Tom and Jackie picked me up at the Charlotte airport and hosted me all weekend. After that for a period of about ten years, Tom and I had a long-distance friendship supported by AT&T. When we were looking for staff, I’d call Tom to see who he knew. At times, he’d call me for the same thing. One day, I called him to see if he might be willing to leave Charlotte when we were looking for an Executive Pastor. Several months and a few face-to-face visits later, God’s timing was right. Tom called me one day to say that he felt God was leading him to come work along-side me to build a great church.

Neither of us imagined the changes in church life that we would see in the next 13 years. Attendance patterns changed, not only in our church, but in most churches in every denomination. We saw continued skepticism increase with the rise of the Nones, continued changes in denominational leadership, and a cultural revolution with issues that found us agreeing at times, disagreeing at other times, but always in support of the message of the gospel and committed to a bond of friendship that we treasured.

I say all of this because Tom has been a true friend for thirteen years. His partnership in the gospel has been a blessing to me as the Senior Pastor of this church. He was God’s gift to this church for a specific season and we are better for it. Yet, I also know that in God’s rich, hopeful future for this church, better days are still on the horizon.

We have elected a Search Committee and we are already at work prayerfully considering the kind of person God would have serve with us for the next part of our journey as Nashville’s First Baptist Church. I believe God’s timing is best, and I know Tom well enough to know that he would not be stepping into retirement if he wasn’t convinced that this was God’s plan for him and Jackie.

Mark December 8 on your calendar for a time of thanksgiving, farewell, hugs, prayers, best wishes, and commissioning for the Crows’ next chapter. Then mark the days ahead for a time of deeper commitment and increased engagement as we navigate into a bright and faith-filled future together as a church.

We are a Blessed Congregation!