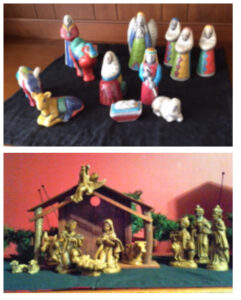 Early in December, 1967, two friends and I boarded a train in Aberdeen, Maryland, and traveled the three-hour trip to Penn Station, NYC. It was Christmas shopping time at Macy’s. My daughter, Nanette, was about to have her first Christmas. I bought a Raggedy Ann doll, a small wooden church that played “Silent Night”, and a paper mâché Nativity. That Nativity was placed within reach of small hands. Two and a half years later, Jeanette joined our family. Two more pairs of small hands moved pieces of the Nativity all over the house. The three wise men always stayed in another room, because “they came from the East.”  Shepherd’s heads were glued and re-glued several times over the years. Now those daughters celebrate the birth of Jesus with their own children.

In September, 2017, Nanette and I traveled to Johannesburg, South Africa. Jeanette, who serves, with her husband and two daughters, in the Middle East, was having serious back surgery there. At one of the markets, I purchased the Raku pottery Nativity set.

These Nativity sets serve to remind me, “Unto us a Child is born, unto us a Son is given, and His name shall be called Wonderful Counselor, Mighty God, Everlasting Father, Prince of Peace.”